Humor is the Spice that Makes Life Easier


I learned many years ago that if you can find even one piece of humor in a traumatic situation, you need to glom onto it and savor it. Humor can help you through some rough times.

I’m going to relate a personal story about how a bird has helped me through my own recent tragedy – with humor.

My husband recently passed away, suddenly and unexpectedly. I was devastated, and that’s putting it mildly.

The morning after he passed I took a cup of tea and settled outside on the patio. We have a small pond with a waterfall, and it was filled with a dozen goldfish. A remote is used to turn on the waterfall, and the sound is so soothing that I immediately stood up and tried to turn it on, but it wouldn’t start. However, that’s not the gist of this story.

I sat down, and looking up I saw a crane/heron, I’m not sure which, on the roof of the house behind us. I know they turn up occasionally at the nearby lake, but I’ve never seen one around my home. Feeling a little sappy at the time, I thought, Oh, that’s Al and he’s letting me know everything is going to be okay. The bird hung around for about half an hour, just sitting and staring at me. I grabbed my camera and took his picture, but I haven’t had the film developed yet or you could see him.

End of story, right? No. The next day the crane/heron returned. This time he climbed down the neighbor’s roof, a little closer to me, and sat and stared at me again. Oh, my, how I thought my husband really wanted me to know things would be okay.

The third day the crane/heron returned and I was amazed. My heart leapt, knowing how much my husband cared for me. That is, until I walked over to feed the fish and they were gone! The bird had eaten all of the fish.

Now it’s the end of the story, right? No. Some friends came over to help me with things and one of them threw a pebble into the pond. Two fish came rushing out from under a rock overhang. Oh, my gosh! The stupid bird had missed two of the fish! I ran for the fish food and tossed them some pellets.

In the meantime, my daughter tried to turn on the waterfall and it started right up. Uh, my husband always turned it on in the morning, and I always turned it off at night. It seems I’d been pushing the Off button out of habit. Problem solved and at least two fish had survived.

Now it’s the end of the story. No it’s not. On the fourth day I got out the fish food – enough for two fish – and strolled over to feed them. Six fish had finally worked up the nerve to come out from under the rocks. Mr. Crane/Heron didn’t get to fill his belly on his recent pond raid.

So what’s so funny about all of this? My husband had a wonderful sense of humor and this felt like something he might have orchestrated. In my own way, I still feel as though he’s been telling me to pull myself up by my bootstraps (not the way he would have worded it) and take care of business.

Yes, I honestly believe that in life, and in fiction, sometimes you have to let humor do a little healing.

Until next week, look for the humor in what life throws your way.

Interesting note, at least to me. My husband came up with a few of my book titles. How Now Purple Cow was one of his best ideas. The story has to do with purple cows and elderly spies. Great title!
Posted by Marja at 12:30 AM 32 comments:


This week my guest is James R. Callan, an author whose books I read and enjoy. He's going to talk to us about book covers and just how important they can be, and he offers some great advice. Welcome, Jim! 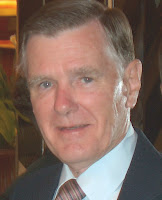 The old wisdom is, “You can’t tell a book by its cover.”  It’s still true.

Today’s indie writer needs to put that aside and remember the new wisdom: “You can SELL a book by its cover.”

What does that mean? If the potential reader does not know the author, or has not been referred to this book by someone, then the first thing that will catch the prospect’s eye is the cover. If the cover does not elicit some response, the reader moves on to another book. So, the cover’s main job is to get the reader to pick the book up and check it out.

Here, we are talking about the entire cover. The title is part of the cover, an important part. Once the picture has stopped the customer, the title must interest her.  It must raise a question, intrigue the client, convince her to investigate further. That means read the back cover blurb (again, part of the cover), or open the book and read a few paragraphs.

But, the cover picture and title must stop the roving eye of the customer, and get her to take the next step toward buying.

How do you make a striking cover? First, let’s play fair; it should reflect some part of the book. Scatter some books on a table top and see which cover jumps out at you. Which one says, “Pick me up. I promise to be interesting.”Do this several times with different groups of books. Do you see a trend in the books you select?

Usually, the cover should be a single, clear image. Except in unusual cases, which will require a superior cover designer, stick with a single idea.

Avoid the common fonts, like the one you will use for the interior of the book. Unless there is a compelling reason to do otherwise, select a clean type, easy to read, even from a distance. Don’t give the reader a reason to move on to another book. The same applies to the author’s name, although it can certainly be a different font.

For the first Father Frank mystery, Cleansed by Fire, I used a cover filled by a raging fire. The title is clear and easy to read. The author’s name should have been a tad larger. But the white on black stands out.

The cover for Murder a Cappella has drops of blood dripping from a crown on to a sheet of music. Eye catching. And it reflects the theme of the book.

For the second Father Frank mystery, after many attempts, we arrived at a cover which shows the defiance of a man, and brings in the idea of private property, a key component of the book. Also, a ghost-like set of buildings alludes to an impending shopping center swallowing up a man’s land. I felt both of these elements created a sense of conflict and danger.  (I actually put two candidates for the cover up on FB and ask people to vote on which one appealed to them – without reading the book. They selected the one that is on the final book.)  We also used a slight 3-D type face to enhance the feeling of “over.”

Another point to consider is that on Amazon and other on-line retailers, the image of your cover will likely be very small.  How will your cover hold up when reduced? Look at the author’s name on the two covers above. For Cleansed by Fire, the name is almost too small to read. And that image is probably larger than many on-line images. But, on Over My Dead Body, I had learned the lesson. The author’s name is large enough to be read even when the image is reduced. And remember, your name is your brand.

So, here are some key points. Strive for a striking cover. Use only two fonts, one for the title and one for the author’s name. Avoid standard fonts in favor of a font that reinforces the feeling of your book. Your name is your brand.

You’ve spent months on the book. But the thing that the prospect makes her first decision on is not the book.  It’s the cover.

Back Cover Blurb for Over My Dead Body

A large corporation is taking land by eminent domain.  Syd Cranzler stands in its way, threatening a court battle. After a heated meeting with the corporation representative, Syd is found dead from an overdose of heart medication.  The police call it suicide. Case closed.

But Father Frank, Syd’s pastor, and Georgia Peitz, another member of the church, don’t believe Syd committed suicide and begin to look for clues of what really happened. Will this affect Georgia’s romantic interest in the lead detective?

When the priest is almost poisoned, they convince the police to investigate further. Immediately, Father Frank becomes the target of rumors and speculation he might have had something to do with Syd’s death.

The more clues Father Frank and Georgia uncover, the more danger they find themselves in. Can they find the real killer before they become victims?