Surprisingly, one question that’s been posed to me numerous times is, “Do you hear your characters’ voices in your head?” The answer is, of course. Although not audible voices, every character I write about speaks to me at one time or another.

Yes, the characters talk to me. Sandi Webster tells me that she wants to be good at her job, and she’s not always happy when I write that she’s bumbled her way through a situation, or she overlooked something. She wants to be taken seriously. I can’t blame her. I feel the same way. She also tells me how frustrated she is sometimes. Sorry, Sandi, but that’s life.

Livvie Brewster, Sandi’s mother, is menopausal and when she talks, I listen, no questions asked. I always hope she’s remembered to take her hormone pills. Martha Workman, Sandi’s aunt, can be gruff and bossy, but as a retired school teacher she tries to be tactful. Okay, she’s not tactful, and she’s outspoken. These sisters are often pushy and take off in their own direction. Their voices can be loud and demanding.

It’s a bit different when male characters try to talk to me. They don’t always understand the women in their lives. Peter Goldberg is an ex-cop and Sandi’s husband and partner, and he was used to being in charge. He wants to protect Sandi, and he can’t understand why she’s so adamant about being in control of her own destiny.

Stanley Hawks is a meek and mild little man who works for Sandi and Pete and who hasn’t experienced much in his life – that is, until he met and married Felicity, and they had a son. All bets are off as he grows and learns. He talks to me about wishing he could be more like “one of the guys.” I try to help him with his wish.

The animals in my books can be especially fun to listen to, but they can be boring, too. They mostly talk about eating, playing, pooping and sleeping. No surprise there, but every once in a while they tell me they want to play a real part in the stories. Bubba and Clementine can be pushy when the want to be, but they do enjoy watching out for their people.

There’s a new character on the scene, too (The Accidental Gumshoe – A Sandi Webster Mystery). Sioux Simms is Sandi’s great-great-great-aunt. She was a teenager back in 1920. Listening to her voice was a whole new experience since things were so different in that era. The situations she gets into and the slang in her speech made me sit up and pay attention.

The Bogey Man Mysteries is another series and a whole different set of voices, including that of a young boy. He has to speak a bit louder when talking to me because I’ve never had a son and I don’t always understand what he wants to say or do. The dogs in this series are different, too. They have issues they show me more than they tell me.

Writing about a bad guy or a victim is one of the hardest things to do. They speak to me and say things I’d rather not hear – ugly things and sometimes sad things. I’d rather watch the world through rose-colored glasses, and they won’t allow that. It’s simply not a rose-colored world and they frequently remind me of the realities of life.

Do you ever hear voices in your head? Sometimes they’re just memories or wishes. Or maybe you should be writing a book. Think about it.

Until next time, I wish you a week of rose-colored experiences and peaceful voices – one can always hope for the best.

Just released: The Accidental Gumshoe – A Sandi Webster Mystery (Aunt Sioux can be quite entertaining.) 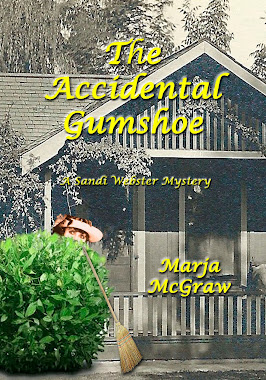 Quiet Times is kind of a deceptive thought. We’ve all been going through a lot over the past year. So much has been happening that I don’t need to share details. We all know things have been different.

I know that I’ve been very quiet for a long time. Maybe it’s time to come out of hiding, in a manner of speaking. Many of us have been stuck at home with only occasional trips to the grocery store or the gas station. My daughter has been working from home, so my daily schedule is different. Between us we have three dogs, and I think it confused them, at first, to find that we were both home all the time.

So, what have I been doing? I should have been posting blogs, but I haven’t done that in a long time. Instead, I’ve concentrated on writing. It turns out it was worth it.

What’s new in my world? “The Accidental Gumshoe – A Sandi Webster Mystery” has kept me busy and the research has entertained me. The gist of it is:

“Sandi Webster is stuck at home with an injured foot. Always the one to help out, her mother sends her a box of old diaries written by her Great-Great-Great-Aunt Sioux, hoping she’ll learn about their family history.

Initially Sandi is just about bored to tears while reading what the weather was like and what her aunt had for dinner on any given day. She’s ready to stop reading when she notices a diary marked 1920, with a page marked.

Aunt Sioux’s father was accused of murder, and Sandi’s seventeen-year-old aunt was determined to learn who the real killer was with the help of her cousin and two male friends, and eventually her mother. What she had for dinner is the last thing on her mind.

Sandi may learn where she developed her interest in being a private detective and her passion for solving mysteries. She may also learn that, of all things, a broom can come in quite handy in some of life’s situations.”

Maybe subconsciously I figured if I was stuck at home, Sandi should be, too, but for a different reason.

Some months ago I received a box full of diaries that one of my grandmothers wrote several years ago. I glanced through them and, honestly, they were pretty boring. Aha! What if they weren’t boring? What if someone was telling a story involving crimes and someone who wanted to solve them to absolve her wrongly accused father? And I was off to the races. It was time to have some innocent fun, or at least my main character was about to have some fun.

In the midst of everything, my daughter brought home a one-year-old rescue dog, another Chiweenie. Little did we know that Mya was pregnant. Not long after her arrival, we dealt with the arrival of three of the tiniest puppies you’ve ever seen. A lot of things were put on hold while we tried to keep things running smoothly. My daughter was working from home, the puppies soon became great escape artists, and my two big Labs wanted in on the puppy action while Mya tried to make them keep their distance. It was like a zoo around here.

Interesting side bar: one of the puppies was white, which is rare for this breed of dog. He was the only male, and we named him Bubba. If you’ve read any of my books, you know about the fictional Bubba. 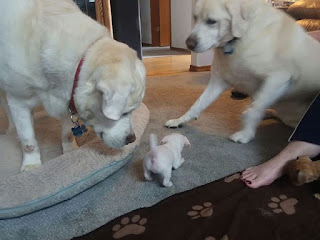 This is 7-week-old Bubba with Sugar and Murphy

We found good homes for the puppies, and things finally got back to normal, whatever normal is. I sometimes wonder if things will ever be normal again.

So, if you’re looking for some entertainment while you’re stuck at home, you might try “The Accidental Gumshoe – A Sandi Webster Mystery.”

I’ll try my best to start posting again, and hopefully I can write about something that will make you smile. I may do some repeat posts, and I might do some new ones. It’ll keep me busy while I try to come up with a new story idea.

I hope you’re all healthy and dealing with your new life, and feeling positive. Hmm. Maybe I’ll even do some blog cheerleading in the future. Life goes on, and so must we.

Until next time, think some happy thoughts. My best wishes to all of you! 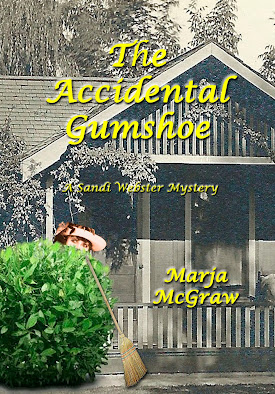