In June of 1918 my grandmother was in an industrial accident and lost her arm from just below the elbow. Not long after that, she married my grandfather. You might wonder why I’m telling you this. In honor of Memorial Day I’m going to share two letters with you that were written by a young soldier who was a pen pal of my grandmother. I thought about editing them because there are a couple of personal comments, but decided you might like to read them as written.

This young man was stationed in France, and I’m presenting you with his letters exactly as they were written – misspellings, commas, periods, no periods and all. These letters are a small piece of history, and I’m thrilled that my grandmother never threw anything away.

Thanks to one of these letters, for a brief moment I stood with a young soldier in the Argonne Forest on Armistice Day on November 11, 1918. Yes, this is Memorial Day, and I’m remembering those who served our country. David was one of them.

I received your letter yesterday and was very, very sorry to hear of your terrible misfortune. Peace articles were signed yesterday and hostilities ceased at eleven oclock. We are in the Argonne Forest on the ground that the Germans have just left and will be glad to get back out of the lines again where you can see a civilian. And hope to be on the way home soon. I consider myself very lucky to come out of this great war as well as I am. The guns were firing yesterday right up till two minutes to eleven. Last night we held a celebration of our own the air was ful of star shells and rockets and flares which the Germans left behind. It was like a fourth of July celebration.

Tonight it is the same when a star shell is up you can read a news paper by the light. Well I have had a touch of gas in fact several kinds, tear gas, sneezing gas, clorine and several kinds and been under shell fire a great bit and now it is all over and every soldier has a big smile on his face. I must congratulate you on your marriage and I hope you live happy and I wish you the best of luck. I must close now as it is getting late so I will close now.

As ever your friend

I received your letter today and was much pleased to hear from you. I am sorry that I have not any more pictures but if I ever get out of ‘No Mans Land’ and get back to civilization I will have some more taken. I expect to get a furlough in a few days as soon as the bunch now out get back. It must be rather dead at home with all the churches, Theaters and everything closed. Things are worse than that up here where we are all the towns and villiages are almost leveled and no civilians are back here yet. I would like to get back in the S.O.S.

The French Girls are very good looking and they are also very polite and friendly to us. If you see a French farmer Girl on Sunday when she is dressed up you would think she came right from Paris. And when you would see the same girl during the week working on the farm you would not recognize her. France is a very beautiful country and has a lovely climate similar to your state [Southern California] in some parts. We have had no snow here yet and it is quite warm during the day. Of course the rainy season is very disagreeable to us as we have to be out in it all the time. This part of the country that has been fought over there is nothing not a tree but what is dead and most of them broken and the ground is so full of shell holes that you cant go out after dark without falling in a couple of dozen of them and most of them are full of water. There is thousands of German helmets around here, we have one for a wash basin. I would like to bring lots of stuff home but I am afraid we wont be able to carry heavy junk such as helmets. I have lots of German buttons and decorations Well if I get my furlough I will send you some cards. I must close now as it is getting late

P.S. This is German stationary I am using that I picked up in a German hospital.”

My grandmother had several photos of military men, but I have no idea which one is David, so I’m not including a photo.

Until next time, I’m remembering military personnel throughout the years with admiration and appreciation.

From time to time we talk about life getting in the way of work, and that’s what’s been going on over the past couple of weeks. I caught the “Ick,” whatever that is, but things are getting back to normal. Sorry to have deserted you.

This week I’m here to talk about choices in books. We have hardcover books in both regular typeface and in large print. The same goes for some trade paperbacks and we have regular paperbacks. Of course, we have ebooks which seem to be pretty popular right now. I wonder what will come next. And, we also have audio books, which is my subject this week. 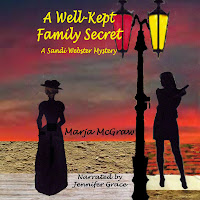 A Well-Kept Family Secret and Bubba’s Ghost (both Sandi Webster Mysteries) are available in audio format now, and have been for a while. Coming up? Prudy’s Back!, another Sandi Webster Mystery. By the way, the reason there’s an exclamation point in the title is to indicate that it’s not about Prudy’s backside. It’s about her return. She was a private investigator back in the forties and fifties, and she wants Sandi to help her solve the unsolved case that meant the most to her. She just can’t let go of it.

After a narrator (in this case Viv Williams) puts the book in audio format, the author must proof the product. That means listening to the narration while reading along in the book. It’s time-consuming, but kind of a treat. Prudy’s Back! was released in 2009. After its release I moved on to other projects and didn’t give it much thought. Now that I’ve proofed the story, I remember how unique and how much fun it was to write. Sometimes looking back can be a good thing.

Prudy was based on a woman I met through someone my daughter worked with back in the day. Well, she was based on her in that she was a P.I. a long time ago. Her daughter remembered her wearing a long fur coat, cowgirl boots and smoking a long, black cigarette. When I spoke to the woman she laughed because other than the boots, her daughter’s memory was quite faulty. I liked the memory and presented Prudy as the daughter remembered her mother.

However, why would someone choose an audio book when so many other formats are available? Why would someone want to listen to Prudy? Many people like to listen to a story while they’re on a road trip and they certainly don’t want a story that will put them to sleep while driving. My mother-in-law had vision problems and she loved books. Audio stories made her day. I can think of several reasons to enjoy an audio book, like if you’re working out you can listen, but those of you who enjoy them already know why they’re your choice.

My husband and I used to listen to audio books while we traveled, and I have to make a confession. When the narrator was male, and he read female dialogue, it made me snicker. It was simply difficult to take a male voice trying to sound like a female too seriously. The reverse is true for female narrators. It’s a quirk of mine, and I can’t help it. However, I thought Viv Williams did a pretty good job of it with Prudy and the other characters, including the men.

So, if you’re looking for choices, you’ve got plenty in today’s market. I still prefer a paper book, but I find myself reading more ebooks simply because of the convenience (and the cost).

Prudy’s Back! should be released over the next two weeks. I’ll let you know when it’s available.

In the meantime, I’ve been lax about promoting my books and it’s time for that to change. I just need to come up with a new and unique idea. Yeah, like that’s gonna happen. I’m not sure there are any new ideas. Oh, well… Time will tell.

Until next time, give audio books a try. They make great gifts, too. Remember my mother-in-law. She might have had vision problems, but her hearing was fine.

Remember, People Lookin’ Half Dead – A Bogey Man Mystery is waiting for you. Think massive heat and homeless people disappearing.