One day my daughter and I were sitting on the patio talking, and of all things a black butterfly flew into the yard and buzzed me. I’ve never seen a black butterfly before and didn’t even know they existed. This beautiful insect hung around for about half an hour, maybe more. He landed on my shed and practically posed for photos. I obliged him.

Of course, I researched it. It’s called a Red Admiral, and although it’s black, there’s some color on its wings.

I couldn’t get this bug off my mind. Who’d have thought a black butterfly could inspire a mystery. Well, it did, and of all things the story is more about the mob back in the 1950s than the butterfly. In the story, the black butterfly isn’t a what, but a who.

Of course, the butterfly begged to see itself on a book cover, so I obliged. I tried putting other elements from the story on the cover with the insect, but it just didn’t work. There’s a yellow dress in the story and I tried adding that. Nope, it didn’t work. I even tried putting a violin case containing a gun and ammo on the cover, but that didn’t work either. It was a lone butterfly or nothing. I have to admit that half the fun of a book is creating the cover, especially when I can use my own images on it. 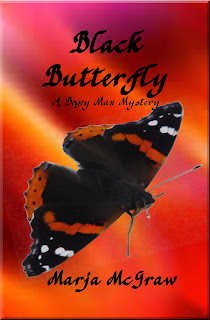 So what kind of story did this little guy inspire? A book titled Black Butterfly - A Bogey Man Mystery. What else?

“Chris and Pamela Cross are in the thick of things, once again, when an elderly neighbor asks for their help. The Black Butterfly has been accused of deadly crimes and her past is catching up to her.

The body of a gangster who’s been missing for over sixty years is found buried under a casino floor in Las Vegas. Once again, the Black Butterfly is accused of murder, which brings the thug’s family to California to find answers.

Enter Chris’s mother and the Church Ladies. Have they lost their minds? Why on earth would they try to protect a woman thought to be a Hit Lady in the 1950s?

The Crosses are about to find answers that might have been better left buried in time.”

I said sometime back that I was never going to write anymore Bogey Man Mysteries, but this theme seemed to fit the Bogey characters best. I guess the lesson learned is never say never.

Now I’ll take a break from writing and turn my attention to a neglected home. It’s also begging for attention. Then it’s on to another Sandi Webster mystery.

In the meantime, I hope you enjoy reading about the Black Butterfly and the thugs who tried to frame her.

Until next time, have a great week and don’t forget to support your local authors.

I almost forgot. Old Murders Never Die – A Sandi Webster Mystery, will be free on Amazon on Friday, March 31 and Saturday, April 1 (not an April Fool’s joke). If the idea of a ghost town intrigues you, this is the book for you. Imagine being stranded in a ghost town with a history. (CLICK HERE to view the book trailer.)


Over the past few weeks I’ve written about including reality in fictional stories. What happens when the reality, well, doesn’t seem real? 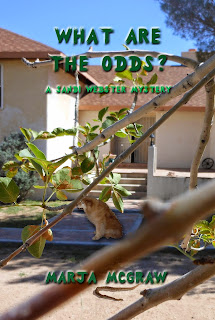 This is the real house, bullet hole in the screen and all

In What Are the Odds? I wrote about a house. A lot happened in and around this particular house. While the story is fictional, the house is real and so were most of the things that happened there.

Imagine one single house with a history that boggles the mind. There really was a murder committed in this house, although it’s not the murder in the story. There was actually a bullet hole in the screen door, but it was too small to show up on the cover of the book, so I had to use a graphic.

The place had remained empty for a number of years, and the condition of the house was the same as in the book. I have friends who bought the house and had to put a lot of work into making it functional again.

I don’t really want to give the story away, but all of the carpets had been removed and there was something on the living room floor that had to do with the real life crime.

And it goes way beyond that. Thieves had broken into the vacant house and stolen sinks, wiring and all kinds of things.

Let me back up a little. We’re not talking about your average house. This one was two stories with an attached apartment on a third level and a huge basement. The fireplace opened into two rooms. There was a barn and there were odd rooms included, along with a hired man’s apartment attached to the aforementioned barn. At one time the place was an ostrich ranch.

Okay, back to why the realities of this house might make a reader wonder about how all of this could possibly be true.

Something fell in the garage and punched a hole in the wall. I won’t tell you what we found behind the wall because it’s a part of the fictional story, too. However, let me just say that we found something behind it that went into the book. It just took a few twists and turns.

There was a hole in the first floor ceiling where a thief fell through while trying to steal wiring. He left his tools behind, and I have a feeling he was in a lot of pain when he made his getaway.

How about an odd water stain that ran from the first floor all the way to the basement floor? It was interesting that there was no leak in the ceiling of the room where the stain started, or in the floor above it.

Spiders? How about a tarantula migration across the property? Lots of the little critters, and most of them were young. You could barely touch them with your shoe and they’d roll over on their backs and curl into little balls. Who’d have thought a tarantula could be cute?

Snakes? You bet. There was a rattle snake in one of the rooms attached to the barn. I’ll never forget someone flying out of that room like lightning was chasing him.

This house was located out in the desert, near a town, but far enough away for privacy. And, yes, there were some odd neighbors.

Most of the things we found in the house and on the property could be explained away, but not all of them.

It was an interesting house and inspired an unusual story.

So sometimes reality isn’t always believable. You just never know. Something might seem outrageous, but that doesn’t mean it isn’t true. And what you've read above isn't nearly everything that happened or that we saw on the property.

Just thought I’d mention it. I’m sure you’ve run into some oddities along the paths of your own life.

Until next time, remember that what you read might be fiction, and then again, maybe not all of it.


This week my guest is Patricia Gligor (sounds like tiger), one of my favorite authors. Her Malone Mystery series had kept me intrigued and entertained. With her latest book coming out, I'm looking forward to some quality reading. I think you'll enjoy her post and learning about her latest book. Welcome, Patricia!

I love St. Patrick’s Day and, although there isn’t a drop of Irish blood in my veins (that I know of), I’ve always been drawn to the culture. Which is no doubt why I chose to make the main character/s in my Malone mystery series Irish.

In my new release, the fifth book in the Malone mystery series, those words will be put to the test. 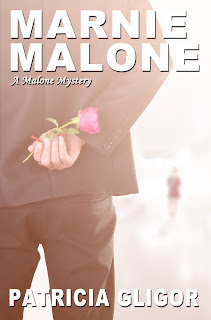 Here’s the blurb for Marnie Malone:

Someone is stalking Marnie.

It’s Marnie’s last week at the law firm of Cliburn & Reeves and she feels like she’s riding an emotional roller coaster. Up when she wins the divorce and custody battle for Callie Jackson against her abusive husband, Jed. And plummeting down when one witness after another decides not to testify against Mark Hall, an attorney at another Charleston firm and an “alleged” serial rapist.

Marnie receives one threat after another and she constantly feels the need to look over her shoulder, convinced that someone is stalking her. With Sam out of town on business, she’s alone in the big, old farmhouse and strange things are happening. Noises in the attic, creaking floorboards and someone watching her from the woods.

As she tries to determine the identity of the stalker, the list of men who have grudges against her grows longer each day. In her line of work she’s made enemies. Is the stalker someone from the past or one of the men on her list? And, how far will he go?

Marnie Malone will be released on March 14th.  It can be ordered through your local book store and is available online (along with the first four books in the series, each of which may be read as a standalone) at:

If you enjoy reading Marnie Malone, I hope you’ll take the time to write a review.
Happy Reading!

Patricia Gligor is a Cincinnati native. She enjoys reading mystery/suspense novels, touring and photographing old houses and traveling. She has worked as an administrative assistant, the sole proprietor of a resume writing service and the manager of a sporting goods department but her passion has always been writing fiction.

Thank you for visiting, Pat! I hope you'll drop in again. (Can't wait to read your latest story.)