Thanksgivings that Live on in Infamy

Thanksgiving is going to be different this year. In fact, most of 2020 has been different for many of us. With that in mind, I thought I’d write about some memorable holidays past. Maybe you can relate to them and maybe you can’t, but looking back over the years these things make me chuckle. Most of these stories are from many years ago. 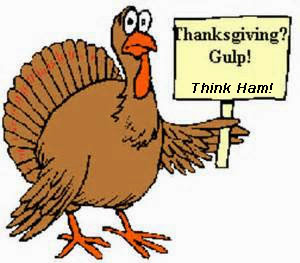 I remember one year when both sides of my parents’ families were coming to our house, which was something we didn’t do often – too many people to feed. However, that year we had more to worry about than the amount of food. About five minutes before people started arriving, the plumbing quit working in the one little bathroom at our house. There wasn’t a plumber in town who would come out on Thanksgiving. Believe me, with that many people eating and drinking all day, it was a huge issue. So, bless his heart, one of my uncles took it upon himself to load up the car every couple of hours and make a quick run to the local bowling alley. In those days everything except the bowling alley was closed on holidays. That year I was thankful for many things, including my uncle and the bowling alley.

There was another year when a great-aunt kept disappearing. In a way, this is another bathroom story, but I promise this is the last one. Anyway, she made several trips to the restroom. Later in the afternoon I made my way to my bedroom to look for something. The restroom was directly across from my bedroom and my great-aunt had left the door ajar. I was shocked to see her drinking perfume out of a bottle and ran out to the kitchen to let my mother know there was something wrong with my aunt. I mean, who in their right mind would drink perfume? That was the day I learned what an alcoholic is and that she’d filled her perfume bottle with liquor. It was also the day I learned why Auntie always had dark rings under her eyes. No, she hadn’t been in any of the accidents she’d told us about. Among other things I was glad to find out my aunt wasn’t such a terrible driver. I’d been afraid to ride with her since there were so many “accident” stories. I was thankful I had an understanding family who cared about her, even though she had a problem. (She did eventually quit drinking.)

Of course, the turkey was never done by the time everyone was ready to eat. “We’ll give it another hour” was a common Thanksgiving phrase at our house. Four hours later we’d sit down to eat. It was worth the wait though. The only time we had black olives was on holidays. (As an adult I’m addicted to black olives.) I remember picking up five and putting them on the ends of my fingers, and eating them off of those appendages. They were a perfect fit. Of course, as I ate them I had to listen to a lecture from my great-uncle about how I barely ate enough to keep a bird alive. I was eating a little bit of everything else, so why lecture me? Yep, he was the husband of the great-aunt who drank perfume. They’d never had any kids and had no idea how much fun eating olives off your fingers could be. (I’ve since taught the process of finger-eating to my daughter and grandson.) That year I was thankful I had enough to eat, even if I didn’t have a big appetite. I was also thankful that my great-uncle cared enough to worry about my eating habits.

There was the year Grandpa was cutting the turkey and it slid right off the plate and onto the floor. And no one remembered to buy black olives. My mother and my aunt (different aunt) always made me laugh to the point of tears. They were so funny together. And then Grandpa would turn off his battery-operated hearing aid so he didn’t have to listen to Grandma talk about buying a burial plot. More laughter. Of course, in the middle of everything the garbage disposal backed up. And my dad’s head dropped to his chest. I wasn’t sure if he was praying or hoping the day would end quickly.  Does any of this sound a little crazy? Or maybe it sounds familiar. Well, I’m thankful for all of my family and friends and for the memories. They kept the holidays colorful.

Moving on, I remember a Thanksgiving in more recent memory. My husband and I invited friends over and, of course, wine was served. Even though I used a “cooking bag,” the turkey wasn’t cooperating. It wasn’t quite done when we were ready to eat. Well, we had a friend who considered herself a gourmet chef. Unfortunately, she’d had a bit too much wine and decided to explain how to tell when a turkey is done. “You shake the leg,” she said. “If it’s done, the leg will fall off.” Uh huh. So every ten minutes Mrs. Chef opened the oven door and shook the turkey’s leg. Sometime later that night we finally got to sit down to dinner. Mrs. Chef had lost her appetite by then, but she found room for one more glass of wine. I was thankful for the humor of the situation, and for the fact that we had friends and family to invite to our home. I was particularly thankful that I learned how to tell when a turkey is done. Right.

If my memories don’t sound funny to you, well, I guess you just had to be there. I hope you all have a Happy Thanksgiving, even if it’s virtual, and that you’ll have some of your own funny memories to share one day.

Until next time, remember that Christmas is just around the corner. Sorry, that reminder is probably kind of mean. You haven’t even had your turkey dinner yet.

The Accidental Gumshoe – A Sandi Webster Mystery is available on Amazon.com now. It’s light reading, a mystery, and a lot of fun. 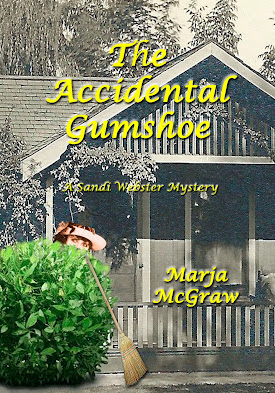