Halloween came and went quietly at the end of October. We didn’t have any costumed visitors this year. However, the day did make me think about fear. There were so many more hair-raising movies advertised on television than I normally see, although scary movies seem pretty popular in this day and age. Sometimes fear can actually be fun, if you’re reading a book or watching a movie. In real life? Not so much.

When I first started writing I created a book titled Secrets of Holt House, later rewritten and republished as Mysteries of Holt House. I tried to think of what readers might like and came up with a spooky old house (which was transformed into a boarding house), located in the middle of nowhere, and I added secret passages and unexplained events and circumstances. I thought it up, wrote it, and read it. It’s certainly not my best work, but it isn’t bad. Here’s the thing. I received comments from readers that really surprised me. The things that happened in that old house and in the secret passages actually scared people. Who knew? I had no idea that I could cause someone to lock their doors, check the windows and sit on the edge of their seat.

Anyone who was around when Alfred Hitchcock’s Psycho was first released remembers the paralyzing fear that the shower scene caused. Believe it or not, there are still women who take a bath instead of a shower because of that movie.

In 1990, two Carol Davis Luce books were released, Skin Deep and Night Stalker. She kept me on the edge of my seat with those stories. Night Stalker took place near the area where I lived at the time. I think knowing the places she referenced made the story scarier, because I could relate to the locations. Sometimes familiarity is all it takes. I’ve never forgotten those books, so they definitely had an impact.

All kinds of things scare people. For some it’s snakes or other reptiles. Big dogs bother others. Things that go bump in the night will set some off because they represent the unknown. I know one woman who won’t read even lighter cozy mysteries because they make her so nervous. The subject doesn’t matter, but the unknown does.

I wrote a post about animals in stories a while back and mentioned dogs making great characters. Remember Stephen King’s Cujo? Dogs can make great villains, too. They aren’t all named Lassie and they aren’t all heroes. I’ve had more than one canine set my teeth on edge, and dogs are my pet of choice. Imagine witnessing a car accident where the vehicle ends up being upside down, and you get out to see if you can help – and a woman climbs out through a window followed by a vicious dog on a leash. That actually happened to me not long ago. It was touch and go for a few minutes.

Ugliness, monsters, clowns, the unknown, surprise, graphic violence; these are all things that can scare readers. However, the list is a lot longer than these few things. Some fear heights, and an author can set a scene where you feel like you’re right there on top of a thirty story building with someone. Mountain driving, bridges, freeways and deep water are frightening to some. What doesn’t give one reader the heebie jeebies will cause another one to lose sleep. How about flying? Plenty of people are terrified of airplanes and flying. My point is that like being on a roller coaster, fear can be both terrifying and fun at the same time.

Thankfully, some writers can spice the fear with a little humor. You’ll see that in some vintage movies. For instance, Abbott and Costello, Bob Hope and Red Skelton add a little humor to their own movie fears.

My mother and I once watched a scary movie on TV from our separate homes, but stayed on the phone while we watched because the movie was too scary to watch alone. Where there’s a will, there’s a way.

What scares you? For me, it’s spiders and flying. Oh, and twisted mountain roads. And… Never mind. 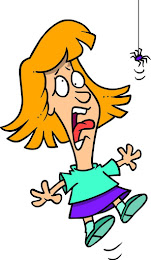 Until next time, have a good week and I hope you conquer your fears. 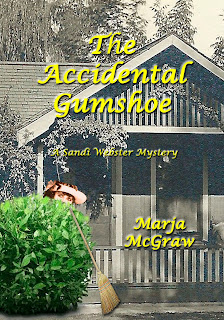